Did You Know? | Chrysler Fact 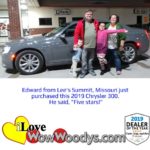 The first Chrysler cars were introduced on January 5, 1924, at the New York Automobile Show — one year before Chrysler Corporation itself was created. These cars, launched by Maxwell Motors, had a revolutionary new six-cylinder, high-compression engine, a seven-bearing crankshaft, carburetor air cleaner, replaceable oil filter — and four-wheel hydraulic brakes. Features like this had never been offered in a medium­priced car before, and the 32,000 first-year record sales substantiated the tremendous appeal of the first Chrysler car.

The Chrysler Six was borne of a unique combination of talent — Fred M. Zeder, Owen R. Skelton, and Carl Breer. These brilliant engineers had attracted the notice of Walter P. Chrysler in 1920 with their novel ideas about designing and engineering. The ultimate outcome of their efforts was the first Chrysler car.

Of course, a lot has changed from then to now. Cars, in general, are becoming more advanced with the latest technology, engine power, and overall body styles.

Check out all the latest Chrysler inventory we have to offer from the Hybrid Pacificas, to the 300 SRT8! http://bit.ly/WowChrysler