Looking back on cars, a lot has changed over time. There’s a lot of facts out there that range from cars manufactured by soybeans, all the way down to electric cars or cars driving themselves! Take a look at these 5 facts that might blow your mind, or leave you with more knowledge than before!

1. The First Speeding Ticket Ever Issued Was For Doing 8 Mph

The first speeding ticket issued to a motorist took place on January 28th, 1896 in Paddock Wood, Kent in England. A constable spotted a fast driver named Walter Arnold speeding down the street Since the constable didn’t have one of the early motorized vehicles, he had to give chase on his bike. When the constable stopped Arnold after a five-mile chase, he cited him for speeding. Arnold had been going four times over the posted speed limit. While that sounds like a lot, the speed limit at the time was a whole 2 mph.

2. The First Car To Have Four-Wheel Steering Was A Honda Prelude

The Honda Prelude was the first mass-produced production car to have four-wheel steering. It was so good at the time that it allowed the prelude to beat out some of the finest cars in the world.

3. The Ford Model T Was The First Global Car

The Model T brought mobility and prosperity on an undreamed of scale through manufacturing efficiencies at a price that anyone could afford. The mass production process perfected the moving assembly line, creating and defining the industrial age and enabling Ford to steadily decrease the price of the Model T. In 1908, the first Model Ts sold for $825. By 1925, it sold for only $260.

4. About 80-Percent Of Your Car Is Recyclable

The world produces nearly 75 million cars per year, that’s crazy! Wonder where all these cars go they are done being driven? According to The Balance, about 80-percent of your car is actually recyclable by weight, and more than 25 million tons of materials from old vehicles are recycled every year. Of that 25 million, the United States is responsible for about 12 million.

5. Motorola Made The First Dashboard Radio

The first Motorola Radio hit the market in 1930 and would set you back $110, that’s nearly $3,000 in today’s money. What is interesting though is today it only takes about an hour or two on average to install a car radio but back then it took two men and several days.

For immediate assistance contact us toll free today at (888)869-0963. Our award winning Finance Management Team works with over 20 local and national banks to get you the best rate and term. When it comes to Price, we’re third party verified among the lowest in the nation! Not sure which vehicle you want? With the largest, most diverse inventory in Middle America you can view all makes in one location.

Check out our easy car payment calculator to view any interest/payment configuration. Come and see why so many car, truck, SUV shoppers come from all over the U.S.A to buy their vehicles at www.wowwoodys.com and read over 10,000 customer reviews on our website today. Also, watch video customer testimonials from our Wowed customers from all over the country! 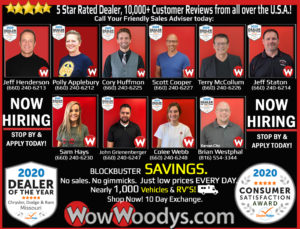